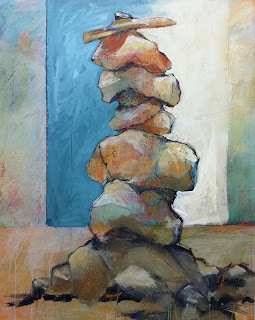 Last week we learned what a TIA is... Joel had a minor stroke and we never suspected he was at risk. This makes you focus on priorities in a big way! I'm still in the studio most mornings but the rest of the day I think about our future and our options. The military taught us to plan ahead... literally... when the B-52's left periodically for SE Asia, wives were instructed to know who to call and what your next steps would be should you be told that your husband would not be returning. And that's what we've always done, always considering our future options. My mother said I had a "delayed reaction" to bad news, I'm good in a crisis but fall apart or go into a depression after the fact. She was right and I hope I can always count on this trait.

So this week we've dealt with a number of things... most irritating is a monitor Joel wears for a month which only malfunctions after hours when the help number is not available. Beeping incessantly and causing stressed cursing... twice it's been put in the garage for 'time out' so we could get some sleep! It helps to have somewhere to direct our anger and frustration. I haven't thrown the damn monitor against the wall yet but have come close. (Have since learned of an 'off' button... who knew?)

Focusing... have been decluttering files, drawers, closets... was doing this in a casual manner way before the TIA incident since it's really about downsizing. The plan has long been to sell the main house and move back to the lake house (only an hour away) once the local g-chicks are driving and we aren't needed for carpool, etc. So that would give us three or so years to get this house ready to sell and the smaller house ready to receive us. I'm feeling a bit more urgent about at least streamlining possessions and paperwork that have taken years/decades to accumulate. Also looking forward to major renovations at the older, smaller lake house to make it more 'home' and less 'cabin'. My new hobby is measuring furniture and collecting kitchen ideas suitable for someone who prefers to stay out of it.

Reality checks continue... what about my career? Well, must admit, in spite of some great sales and positive show results this past year, the overall picture is not encouraging. If ten years younger I would have jumped on the self promotion wagon and would be sending out e-newsletters and brag packs to new galleries with gusto... but after awhile, new beginnings aren't so exciting, I just want to paint without the pressure. Creative exploration rather than simply producing more work. My mind spins with new ideas... some I get around to and some I don't.

Joel is, thankfully, doing just fine... the small stroke was a warning and we are heeding it. He has returned to a regular weight routine at the Y and when the electrodes come off his chest, he'll be back in the water swimming laps. I have a strong suspicion that when he stopped his regular swimming routine (he had a few distracting years with accidents, etc) his body didn't know quite what to do about it... so now we know... got to keep the blood flowing with exercise! Good advice for all of us!

Glad that this was just a warning and things seem ok...We all need to remember to pay attention to what our bodies tell us.

You are so right, Ann... first priority!

I'm sorry to hear about this. Having been through this with my husband, I know how suddenly vulnerable it makes you feel. He is taking the anticoagulant and a small dose of blood pressure pills but I'd feel a lot better if he'd modify his diet! Well, he suddenly likes small salads. I think of all the things we could have done to forestall this -- it was a stroke with no real after effects except that now we are "in the medical system(!)." All I can say is that now you will go forward, being attentive, and your kids will have a model for being active in their own health. We can hope, can't we! Take care, Karen
Nikole

Thank you, Nikole... yes, we can hope. Things seem to be returning to normal.

As soon as I saw TIA my heart did a thump. Tony's an ambulance officer so I understood the ramifications straight away. And you know what? You are *so* lucky. For so many people, their first warning is also their last.
I'm pleased you have positive things you can be doing - otherwise that poor monitor might not have just been sent for time out ;-) Having something, anything, to do in times of stress certainly helps.
Me? I polish my fingernails. Useless, but it seems to soothe me. Only time I wear polish is when someone's sick.
Take care - both of you - and thank heavens you;e both safe.
Hugs from Down Under.

I do so appreciate your understanding thoughts, Cath... my mind is still bouncing around like a ping pong ball with every possible scenario coming into focus, then fading to make way for a better one, or a worse one. But we deal with the present and prepare for whatever...

Dear Karen, I don't keep up with blogs, FB, emails and such as often as I should, so I'm just finding this. What scary stuff! I can't imagine that either of you wlll take this sitting down and that you' ll gently shift where you need to. Please give big hugs to Joel for me and keep one for yourself Annette

Karen, Been a very long time, but Annette called me out of the blue the other day and in our reflections on the past New York trip we all took, your name came up and she told me about Joel. I wanted to say howdy and that I am so glad that he is doing ok. Long distance hugs from Cali to you and lots of warm wishes for continued good health.

Karen, I just read this. So sorry you are going through this with your husband. Adrian had a TIA, but stroke is not what ended his life. Sounds like you are doing everything you can to make sure it doesn't happen again.

I related completely to what you said about wanting to paint without the pressure. I am still doing the self-promotion, but I do wonder why sometimes.