A Different Kind Of Landscape 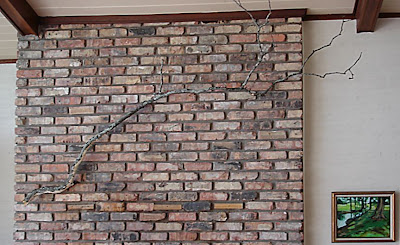 The small landscape in the lower right was painted in 1974 and I'm still pretty proud of it. I recall that I was determined to 'loosen up' and by golly, I did it! Called "A Walk In The Woods," it's a good juxtaposition of yesterday's 'walk in the woods' when I found the tree branch now hitched to a nail in the fireplace brick. It later fell and shattered the smaller branches but the main attraction was the white lichen that traces one side of the main branch. It doesn't show up well against the brick anyway so will find another place to put it. I think it reflects my 'loosening up' as regards the decorating aspects of this place to relax and contemplate.

BTW, the branch was found down by the lakeside, stretched across some very large Formosa azaleas begging to be released from it's strangle hold. I probably wouldn't have noticed it had it been on the ground. 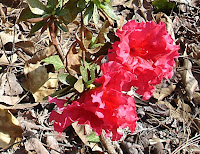 My abandoned collection of azaleas and camellias are beginning to strut their stuff. This one we could spot from the deck and it appeared to be red litter, as in "what's that red thing down there?" But wow! What a beauty! I must have spent extra for that one, but there's only one small branch of it that lives. There's a lot of revitalizing to be done, and we've arrived non too soon.

(Hey Joe! Bet you thought you had about all my older paintings... missed this one! -Mom)