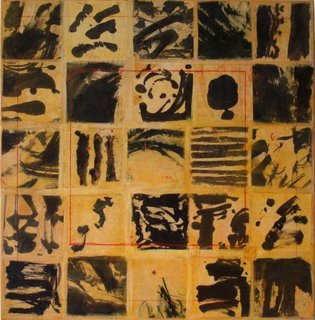 2006 - Bokusho Go-Ruden - 36x36
I swear I'm going to start wearing a small notepad with pen around my neck! I have such great thoughts for the 'Next Big Thing' in the studio, but can't remember boo when I'm there... so I then think of something I need to Google so head back upstairs for the computer room... but have lost the thought once settled in. I know it's a trite commentary on agedness, but Man! it's driving me crazy! Getting a good stair workout however.

Had a super fantastic studio day on Saturday... really made some headway on several paintings and even began to post a few on my website. They require a great deal of time to properly age, often in the 'contemplation spot' over the fireplace or TV, before I know they are ready to be documented. The image above will be referred to as Go-Ruden, or Golden.

I've found a wonderful little Japanese translator on the web that is opening doors to many title possibilities. Seems proper that they be named in such a fashion. Bokusho, however, is not in their data bank, but articles on the language describe Japanese as a fast growing language with many new words. I was delighted to receive a comment a few weeks ago from a reader who checked with her Japanese friend and verified the use of the word ;-) I'd found it used on a website describing the art form, but you know how that goes... you aren't always sure who or what to believe anymore and it does seem to be an underused term. Hey! Maybe I'm on the cutting edge of something! Hee!

BTW, I title with the translated word in parenthesis on both the painting and the inventory data sheet... my frazzled memory, donchaknow?

I was just looking at galleries in Chicago (Doug and I are going on Sunday)--and I found this artist:

I thought you might find "Beneath the Banyon Tree" interesting.

I don't know if I'll get to any galleries as Doug is on Business and spouses are going to be escourted around.

Should have previewed,
Linda Stanley

You find the most interesting URL's... thanks! Enjoy Chicago... it has the potential to be a fav city of mine but I don't get there often enough.

I would gladly loan you my notepad necklace if I could only remember where I left it.

I just came across you work via Martha Marshall - she mentioned you in a recent post.

I jsut wanted to say how impressed I am and how much I like you work. Awesome!