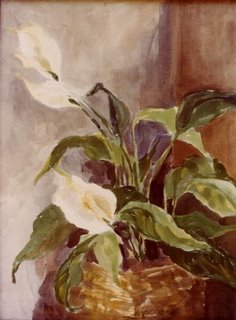 Sitting here thinking back and trying to figure out just when art/painting came into my life. I knew nothing of galleries or museums until fully grown and off to see the world. As a kid I remember the usual stuff from paint-by-number (don't knock it, you learn brush control if nothing else) to creating magazine-collaged party invitations complete with poems. For a friend's pool party, the poem went:
How would you like to get wet?
You will, you know, I bet!
If you come to my splash party,
Wet is what you'll get.
I was the go-to for that sort of artistic/literary challenge. I'm so proud ;-)
Mother was determined that I would play piano but a couple of years of lessons later, the teacher told her she was wasting her money, I was only interested in playing by ear, not practicing scales, etc. He was right, but I still regret not taking advantage and would love to feel at home in front of a piano... a skill best learned while young, later attempts have failed.

In high school only one elective was allowed and since I was already a band student, I couldn't take art. Since the fifth grade I'd been taking clarinet lessons (to my orthodontist's dismay.) My social group was made up of fellow musicians(?) and you know how persuasive that can be in making life choices. Actually, at that point in time, it was probably a good thing that I was linked to a disciplined organization such as the band rather than becoming a loosey goosey artist in the rebellious and free wheeling 60's. With the band, I always had a place to go and people to be with, plus, I didn't have to have a date (at six feet, that was an issue.) My life was full and I enjoyed school in spite of not really being much of a student.

I've often wondered what life would have been like had I taken art rather than band in high school. Certainly I would have found my calling sooner, but would I have been as productive or just another flower child weaving beads and such. As a musician, I wouldn't have fit into the scene... clarinets and oboes just didn't have the same magic as guitars and drums. As an art major I might have known what I wanted to do with my life... but instead, I entered college with some vague intent to become a Home Economics teacher... only because I had to declare something and it offered skills I enjoyed anyway... cooking, sewing and such. Actually, my goal was to find a husband and, indeed, I did get my MRS degree when I was twenty. Luck was with me and he has been an excellent choice, not to mention a supportive patron. We're going to make it all the way!

I often joked that I have more brains in my hands than my head and that's probably not far wrong. I'd much rather improvise than follow precise directions (as my piano teacher had pointed out earlier.) Yet, I've proven to myself that I can do things the proper or intended way, but it's boring and much more interesting to try figuring it out for myself. Early paintings show my intent to learn proper painting techniques, but also reveal deliberate variations from the 'rules'... not always successful, but at least an adventure. I guess it was inevitable that I would migrate to mixed media and abstraction. Spontaneity with oils (as I practiced it) was hopeless but acrylics were made for my style and work habits.

I love hearing how you got where you are...your life's path, so to speak. I wonder also if you would have really discovered art if you had taken it in high school?

Thanks for the insight.

I think the big ingredient was a husband who supported and believed in me through the years of searching for who I was beyond wife and mother. Many aren't allowed that opportunity for whatever reason... I was lucky.

Yes, you WERE lucky to have such a supportive spouse! And we were lucky, too, I guess -- otherwise we wouldn't get to see all this art. Your older Spath painting is great, but I really LOVE your abstracts!

It is interesting how much well-meaning parents and the often necessary restrictions of school organisation can shape one's early path through life. I was steered away from art, and may have come through a richer path, but also benefitted from a supportive spouse. (He was the only one who recognised what drove me, and gave me a set of oil paints for my 21st birthday when everyone else was coming up with the usual stuff, none of which I have any more.)

I was thinking about this business of being trained in art from the earliest days when I visited the Holbein exhibition. They have a couple of his father's works up at the beginning of the show, and it is obvious that Holbein had an intensive technical training at an early age. Picasso too, of course learned the mechanics at such an early age that he was able to breathe art.

Perhaps the geniuses are those whose early training and aptitude fit so that they race singleminded far ahead while the others are fumbling their way to the light. On the other hand look at what Matisse achieved after having come late to art.

How interesting this post is ... the ifs and buts of childhood play a great part in who we become as artists ....

I am particularly interested to hear about your experience with the piano ... I wrote about my own experience of this recently in relation to my painting.

QUOTE "When I was a small child I started piano lessons and these continued until I left school. I was expected to study progressively for different Grades, which were tested by practical and theoretical examinations. In addition to these ordeals my mother liked me to enter Music Festivals .... terrifying events which involved numerous children taking turns to play the same 'piece' up on stage, in some large auditorium or other, in front of a panel of adjudicators. I was never a winner and I hated it. I play the piano still but only for my own enjoyment ... and never in public!

How different it was for my favourite aunt, who had learned to play the piano 'by ear', could bash out anything at all and was delighted to do so. When young she would go to see the lates West End shows (London) and musical films, come home and delight the rest of the family with renditions of the songs and music she had heard! For her playing the piano was a creative joy to be shared.

The point I wish to make here is that my experience of learning to play the piano was very rule bound .... musical pieces had to be practised until they were exactly right, there was no room for deviation or error. I ended up being fearful of making a mistake and of trying to play without the sheet music in front of me in case I 'got lost'. I developed a terminal case of musical constipation, in fact!

When I took up art again, after many, many years of not doing any, I read and listened and watched. I was eager to learn the 'right way' to do everything. As with my music I wanted things to be exact and tidy, and I did not want to make any errors. But for the past year or so I have felt strangely dissatisfied and wanting something more. Thinking about my experiences with the piano I began to realise that I was getting pretty constipated with my art as well!" UNQUOTE

You wanted to 'play by ear' ... you wanted to do things your way! And I am sure that this 'individualism' is what has led to your success as an original and gifted artist.

Hope that I have made some sense here.

Thanks for some very interesting comments, Lesly. The analogy of differences between piano and painting is something to ponder, one could argue that technical skills in both are necessary... but which is more rewarding would depend on the student, I suppose. For me, the patience to practice was missing, probably in both venues, but painting was less labor intensive and offered a better chance at self gratification. My 'playing by ear' abilities were limited to the time I spent practicing that element as well, so lacked expertise in the long run. Not nearly as satisfying, for me, as painting.