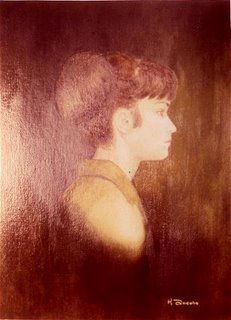 1965 - First Portrait, oil, 24x18
I want to thank Omega for her comment which leads me into today's installment of 'how it was'.

Omega said...
"It is interesting how much well-meaning parents and the often necessary restrictions of school organisation can shape one's early path through life. I was steered away from art, and may have come through a richer path, but also benefited from a supportive spouse. (He was the only one who recognised what drove me, and gave me a set of oil paints for my 21st birthday when everyone else was coming up with the usual stuff, none of which I have any more.)"

As it happened, my "supportive spouse" also gave me a boxed set of oil paints, complete with a tablet of canvas textured paper, for Christmas one year... I must have been about 26. I don't know what motivated him as I don't recall wishing for such a gift. But I took to it like gravy on rice. But where does one start when, out of the blue, you have materials in hand that you've given little thought to using, especially in early years of mommy-hood. I remember loving a drawing my young son had made of a tall building which leaned severely but was beautifully composed with a wonderful green to brown palette. And I tried to copy it. Interesting that I chose an exaggerated, almost abstract, image rather than something from real life... probably figured if a 5 yr old can do it, I could too! A flat failure, it was, but I was hooked.

We were stationed at a SAC base near Glasgow, MT... very remote, a good 20 miles from the small town which was 250 miles from anything of any size. Jake was a navigator on a B-52 crew and was beginning what would become annual 6 month tours in SE Asia. The base provided well for the families left behind. Painting classes were offered for $.25 a lesson... and I didn't miss a one. The portrait above was done in this class, and it was the one the model chose to buy. My first sale! $20.00!

Omega went on to say:

"I was thinking about this business of being trained in art from the earliest days when I visited the Holbein exhibition. They have a couple of his father's works up at the beginning of the show, and it is obvious that Holbein had an intensive technical training at an early age. Picasso too, of course learned the mechanics at such an early age that he was able to breathe art. Perhaps the geniuses are those whose early training and aptitude fit so that they race singleminded far ahead while the others are fumbling their way to the light. On the other hand look at what Matisse achieved after having come late to art."

Art is a funny business and we all know of genius artists who will never be recognized. Today one's education seems to determine quality. I'm not denouncing the value of a good education, the lack has haunted me for decades. But I did seek and study with outstanding teachers in varying mediums and styles and at every level. Being a military family we moved frequently and the first thing I would do once the family was settled, was identify the best art teachers and actively participate in local art organizations. I observed and I learned.

I'm not very assertive and prefer that my work speak for itself, so without an impressive resume to assist, I held back and let my career take it's course without a great deal of initiative on my part, other than to be ready when an opportunity presented itself. Again, I was lucky and a few good galleries found me. One thing lead to another and I've had a good run, but not a great one. I think I could have done better with a bit more chutzpah... or self confidence at least.

I'm wondering if artist don't need managers, like bands and actors have.

I'd always assumed that a progressive gallery would be that kind of manager, but if so I haven't found it yet. Thought I was nurturing a d-i-l into that role but she's now an ex... sighhh.

Steven, you obviously don't know or appreciate the finer points of southern cookin'... it's an apt analogy;-)

karen
There are those who would say you have had a great run. You've had a successful career balanced with a wonderful family life. Many (men and women) who have the list of degrees and the celebrated galleries would give that up for what you have.

I'm going to say this for myself, but in seems to make sense in this context:

Your past should be learned from and continually built upon. Keep pushing yourself and setting goals til your 120 years old. That is the meaning of life.

ps. I've never lived in "the south". In the Mighty Pacific Northwest, our rice has soy sauce on it.

I agree with Annette, Karen. So few of the "greats" had personal lives that were not tumultuous and troubled and really didn't (or don't) have the balance in their lives that you've had.

Having a great resume would nice I suppose, but if you have to do uncomfortable things (like being pushy and super assertive) to get it then I am not sure of the value in that. Not saying one should push themselves a bit however.

Given the opportunity, I wouldn't/couldn't bring myself to change a thing, be it art in high school, MFA or family vs career. You are all very right... I've got the best of all worlds. I'll just keep on keeping on and take it as it comes... so far, that's worked well enough. I hope I haven't sounded regretful, I often play 'what if.'

Nice! Details are of great details and to rich!