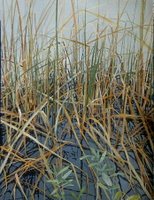 And the old bug-a-boo of titles raises it's ugly head again. I'm finishing up four more of the ricepaper/collage/bokusho paintings and am strongly tempted to continue numbering them rather than trying to come up with novel one or two word titles. I've numbered series work before, sometimes numbering into the 50's and 60's and I swore I wouldn't do that again. But geeze! Naming a work that is descriptive of some element or references it in some way without being cliche is darned hard to do on a continuing basis. Man, I've dipped into Shakespeare, Greek Mythology, foreign words including Latin botanicals and Japanese numbers... I've researched Tartans and named a whole season's worth of paintings after them... I've combed the dictionary and made notations whenever I come across anything title worthy, made a file of intellegent words and included definitions and pronunciations just so I wouldn't embarass myself. But how easy it would be to let them go forth without that crowning glory. Why not let the date be the title? Except that I tend to finish a bunch on the same day (okay, who would know if I spread out the dates?) Sighhhhhhh..... okay, I think I'll do this: I'll continue the Bokusho numbers for awhile longer and add a one word title to it... like "Bokusho 9 - Reversi". Then if I can't think of a title it will just be a number. Until a better idea comes along. BTW, and FYI, a gallery director once told me that the title she was most tired of seeing was "Reflections."

Remember my T-shirt project with names? G-kid had a 'meet the teacher and classmates' morning in preparation for school starting soon, and she choose to wear her name shirt "so everyone would know how to spell my name correctly!" Libi, by the way, means 'Beautiful Blue Jade' in Chinese... but you probably already knew that.

I used to try to think of names for my work but in the end I go with the numbering system. All the names I could come up with seemed so contrived that I felt numbers worked better. I have "working titles" in my head for much of my work (so I can remember which is which) but they certainly aren't names that would be appropriate for artwork.

I got a big smile out of the "Reflections" comment. I was at a gallery at the Seattle Center a few days ago and i think there were two series there with "reflections" in the title.

I can't imagine having to come up with pithy, meaningful names for art without being trite. Numbers work.

Just make up some words for your titles -- use any consonant, followed by any vowel, and keep going until the painting has a name: such as "naroke" or "remyto." Probably just as meaningful as some other foreign words no one knows. Of course, you could end up with a swear word in some other language, I guess. Oh, well, numbers are always good, too.

I'm from the "working title" camp. There is no reason to "come up" with something. Don't try to be someone you aren't. . . people will figure out who you are in the long run anyway. I love titles like "Bokusho - zigzag" You have your over-arching idea (macro) with the mundane craft (micro).

As an aside, although I enjoy seeing your paintings from 13 years ago, I am itchin' to see what you are doing now. (There is some hypocrisy here because I often show my old work in an attempt to build context too).

Interesting comments... and appreciated. And thanks, Steven, for wanting to see more of my current work. So would I. That might require that current work was actually being completed and photographed. The fact that titles are on my mind indicates that I might be getting close, but hey! Maybe I'll address this in my next entry.

Geez, coming up with titles is the worst! And you have put way more into the effort than I ever plan to! I tried numbers for awhile, but several of my galleries said it's easier for viewers to connect with a word title. Argghhh! So I stick with descriptive titles, sometimes I use a musical reference, like The Big Pink, if it's appropriate.

And I am guilty of naming a piece "Reflections". A water piece, too, what can I say, I was desperate!

great photo of Libi -- that inspired an "awwwww" from me!

i used to get my writer friends to name them for me. one finally got fed up and suggested i title them by the date followed by the number for that date. so i do that now with everything, even the most worthless of sketches.