The Reality Sets In 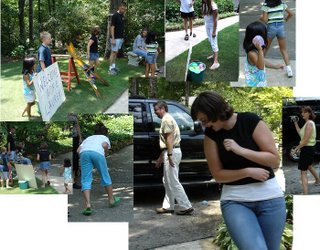 One of the realities of gathering great experiences is that they are often very difficult to share. Just as I learned (or re-learned) after my month in France, that my friends and loved ones had a very short attention span for listening to my many adventure stories... our oldest granddaughter, Lauren, is now experiencing the same lesson. "But-But-But... a whole year in Belgium! It's changed me! I'm so different now because of it! Why aren't they interested?"

We had a long talk...at least I could identify with her and share the disappointment. I assured her that she would meet people who would be interested, those who have been and those who plan to go. Stay in touch with other exchange students as they are probably going through the same transition. She will understand better later, after her life is full of here-and-now stuff to talk about. She will understand as she stifles a yawn when someone else is relating their personal adventure. She will remember to be a bit more attentive, because she knows what it feels like to try to share the high that comes from another time, another place.

It's not that her family doesn't care, they read her blog and fielded her phone calls, worried about things they could do nothing about but gave her the confidence to handle situations as they arose. But now they have more pressing matters to deal with... like the demands of college preparations, encouraging the focus of a whole new lifestyle, helping her build the foundation for her future. But I know... I remember... the door to all those memories just won't shut that easily. That's okay, it becomes a very special hidden jewel to hold very close. Some of the best experiences are like that.

How nice that you took extra time to spend with your granddaughter to explain this to her. It's so nice to be able to see both sides of a situation as we get older, one of the benefits, I suppose.

I love what you say about how difficult it is to share adventure stories with family and friends. It's easy to box those we love into the places we are familiar seeing them in.

It can also be difficult to define how an adventure has changed us or to sum it up into a digestable story.

I, too, have found that the experiences that remain most precious to me are those I've kept quiet about or have been able to share with someone I've bumped into on my course through life who somehow relates in ways my loved ones can't.