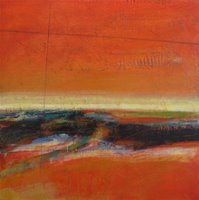 This month is entirely too busy... and then there's Xmas. Just back from a quick trip to Asheville/Knoxville. Was going to cut ties with the gallery in A'ville but she's got my paintings in several promotional projects and seems to be working hard at getting the gallery on a good footing. So instead of taking everything, I let her keep four, two old and two new ones. I'll ship some smaller work when I can get it together... I think one problem was that she only had large ones and tourists need to be able to impulse shop smaller work.

We woke this morning to an ice storm that threated to imprision us in the motel... without power, even! But we were on the edge of the storm and the Interstate across the Blue Ridge Mtns was good to go... so we did. Left four large works with the gallery in Knoxville, again promising to fill out the inventory as soon as possible... man! the unproductive summer is really catching up with me!

Now to put together a car load to drive to Memphis next week... including a commission for two more to match one they have for a lady doctor. They'll be smallish and hopefully go together quickly since they have to 'go' with the other, Red Sands, pictured here.

And I've yet to shop for the locals in the family!

Labels: ~On The Road