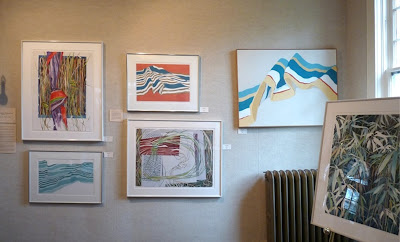 So there I was... a young mother of two, wife of an AF Officer, stationed at remote AF Base in Montana... and alone much of the time. The seeds of art began as a way to ward off cabin fever... little did I know. My leanings had been to music, not visual art, had never been in a gallery or museum in my life. One year of college, one year of accounting and then marriage.

Fast forward to 1971, we are station near DC, the family now includes two in school and a babe in diapers... and one day, on an exploratory visit to DC, I walked into the Corcoran Gallery... into several rooms of giant stripes by the Color Field painter, Gene Davis. Epiphany! So THIS is ART??? Drab brown renderings of the Old Masters (no matter how exquisite) were quickly replaced by my new discovery... I HAD to know more. And so began my real art education.

I located the Maryland School of Art and Design in Silver Spring... small at the time, now quite impressive. I was able to take several classes including serigraphy which I latched on to with gusto. I made my version of Gene Davis stripes... but also explored all types of images. I also spent four years studying watercolor with Skip Lawrence at his studio in Laurel, Md. I made every effort to associate with fine artists and teachers wherever I went, gleaning info, soaking up as much as I could to make up for what I considered the embarassing lack of a formal education... a degree or two to head my skinny little resume.

By the time we transferred again, I was ready for the art festival circuit... and Alabama served me well in that regard for the next ten years. At last! Something to put on my resume... not only that I could be accepted into selective art festivals, but win a few ribbons as well. I was pumped!

This was great to read. It's roughly where I'm at (exploring, studying, making efforts to meet other artists, beefing up the resume) except that I'm much older than you were when you first got going! Congratulations on the show, and I look forward to the next installment of your guided tour of the retrospective.

Thanks, Annie... you've got a great start, if indeed it is a start. Your work looks very polished to me!

Thanks for sharing this! How were you able to balance all that with taking care of young children? I am at that point right now- with only one toddler though, but I do want more children...but I also have a great pull towards my art. It is inspiring though to hear the stories of other women artists who were able to do both. Thank you.

Bridgette, I wish I had an answer. You find time to do appropriate things that don't interfere with the kid's needs. No need to spread everything out when you know the babe will be waking soon. Read art books instead, and the like. But most of all, remember that kids are dependent on you for only a few years of your long life. You focus on the preparatory work to make yourself ready when YOUR turn comes. My kids were spread out... ten years between oldest and youngest. Having them closer would have made it a bit easier, I think.

Thanks Karen, that makes a lot of sense and does help. I only have this time with him once and I am fortunate that I have it. I have one full studio day and at least I have that!

You'll look back on this time and be amazed at all you accomplished. You just can't see it at this point.