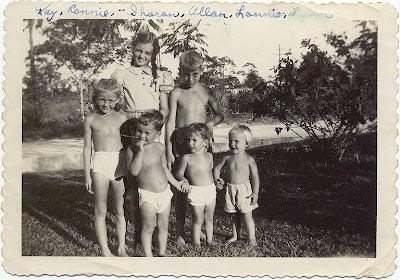 Sharing mode this morning... slogging/blogging through way too much political news/trash-talk and personal how-tos, I happened on this refreshing account of a night in NYC by art blogger Nancy of Tire Shop who has a way with words that sort of clears the air of too much perfume... not unlike a Roter-Rooter for clogs of political correctness. I'll be first to say that her accounting of a return to NYC was far different from mine, it still made me grin.

But what really got my cobwebby memory banks creaking into motion was reading about the experience of living through a hurricane. When I was about eight or ten we lived on the outskirts of Fort Lauderdale, FL, an address which is now just about dead center prime real estate... back then it was neglected countryside with lots of pine and palmetto plus a smattering of houses on dirt roads. Ours had been built by a man reputed to know what he was doing and it had already withstood several hurricanes. As a big one approached, neighbors we didn't even know began asking if they could stay with us, and they did. As the eye passed directly over us, I remember going out into the still, grayness... eerie and surreal. Then we were told it was time to get back inside... but an old man was missing. He obviously had decided the storm was over and headed home. Chaos commenced but he was found and retrieved before the winds began their counter blow. But anyway... reading the following felt very familiar:

What is it like inside a home near the coast under assault from 100 mph hurricane winds in the wee hours? You don't usually run your generator right away while the storm's still blowing hard, assuming you even have one. So it's pitch dark, the power is out, windows are boarded. You have no internet, no cell phone, no refrigerator or AC, the landline is deader than a doornail. A battery powered radio or TV is your only point of contact with the outside world, and since it's wall to wall hurricane coverage on the one or two shitty channels you can barely see on the tiny black and white screen through the snowy static, it's not a hell of a lot of comfort. You conserve your batteries, sit mostly in the dank dark, and listen: It's loud. Wind screams in pulses to a chorus of driving rain rising and falling from whisper to piercing hiss, there's a constant hailstone pitter-patter of debris, punctuated by frequent ringing bangs when larger chunks smack into the sides and roof. If there are stands of trees nearby, you can hear them thrashing violently. Every now and then a sharp crack will signal a snapping trunk or large branch.

In the dim beam of a flashlight or flickering light of a candle, you can see the walls and ceiling flexing with each mighty gust, at times it's almost as if the interior of the house breathes, rafters and beams groan and complain under the shifting strain. Pets cower and leap into your lap. You worry that the roof has been holed somewhere. You worry that even a small breach will open wider and allow the wind purchase against the underside. You worry the roof will peel off your house like a freaking can of sardines. It goes on for hours and hours, it goes on regardless if you are mentally and physically worn out, it goes on as you doze off for jagged, stormy catnaps.

I imagine hundreds of thousands of people are experiencing something like that right now. In a Cat 1 or 2 windfield, at a safe elevation, barring a tornado or large crashing tree, even an older wood frame home is likely to hold together well enough to provide critical shelter from the elements. But among those riding out Ike are reportedly thousands who chose to remain behind in the most vulnerable, low laying regions.