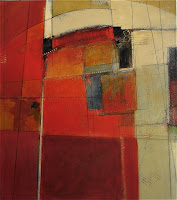 The New And Improved Realm 2 - The Earlier Realm 1
Received an artist alert that the Atlanta gallery has a project needing numerous big paintings to choose from... I hadn't planned to hit the road in that direction until after the May show but after selecting works for rotation from the NOLA gallery... there they were, all these big babies needing to be shuffled. So I set aside other projects and spruced up as needed.

It's inevitable that works being shifted around a gallery, taken out on approval, etc, are going to get bruised around the edges. I don't frame my paintings, they are gallery wrapped and carry a lot of texture and paint around the sides. Chips happen. So all were properly touched up, given a new coat of Golden's GAC 500 (I don't use varnish because of these needs) and are now looking like bright shiny new pennys, though a couple have been hanging around (har-har) longer than others.

Above is the repainted and older version of Realm, mentioned in an earlier post about mixed titles. They are 48x42, not 48x36 as previously reported. Had to hurry up the repainting process so it could make the trip as well.

Atlanta is an easy day trip with time for a nice lunch and a little shopping. A stop at Ikea gives it a double barreled purpose since the lake house is still in need of this, that and something else. Lots of budget friendly choices at Ikea.

Awwwww. I wanna go. Have fun!

Have a good trip!

Martha, we need to plan!

Lisa, I've been eying those meatballs, but keep forgetting to bring an ice chest! Thanks for the recommendation... next time!