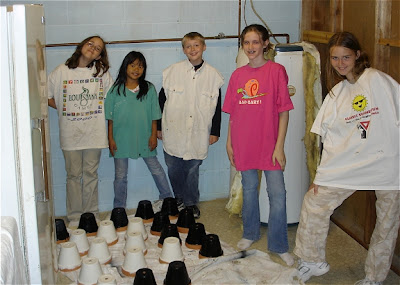 Early morning, last day of Kid Camp Week. Didn't finish decorating the checkers pots before we had to leave for the main house, (it was just too cold to enjoy the lake house properly) but they did get some decorative painting done on the black and white base coats, forgot to take pics. They'll be making summer trips up so we'll continue the project then. They had a ball as they always do when given a chance to wear my old paint shirts.

Another session was spent in my studio, each with a small canvas and (I think) an ingenious system of single color palettes (lids) with a brush for each, plus extras for mixing. I have a drawer full of old brushes that come in very handy at times like this. I had them sketch their ideas before they could start painting... some were quite good as well as the follow-throughs but pics still in camera so will show later.

All in all, it's been a fun week with swimming, playgrounds, malls, etc... I'm realizing two things: what worked in the past doesn't entertain as well when they become preteens... and I'm really getting into AA. That would be Age Awareness, not the other one! Realizing how important having my own routine/rut is to my energy level. Much as a baby needs a regular routine, so we do at the other end of the game. Especially down times when the mind is able to rest and gear up for the next challenge... this becomes more and more important in order to remain operational. Mentally I have no doubts that I can do it... but getting the bod to follow through on all those great ideas requires manipulation.

Tomorrow is Friday, I'll drive them back to NOLA, do a gallery check and see a few shows on Saturday and drive home on Sunday. Then a massive surge in the studio to wrap up the Memphis show. Basically, I will be moving the Bokusho show with new works replacing those which sold in the first show.

I really appreciate the cooperation from my local gallery that allows me to pick up the show and move it on. I don't think I could have created all new works for a second show in two months... whatever made me think I could? New works have been painted (or are still in process) to replace sold pieces and that's about all I could muster and still be happy with the work.

Making coffee! I have got to teach McKenna that trick. The only problem is that I'm usually up before she is. Oh Well!