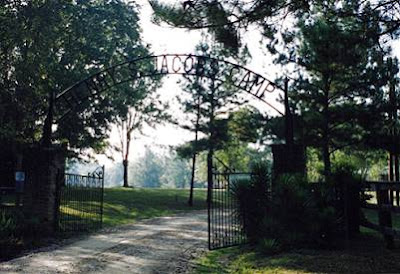 Not too long ago, for about a 15-20 year time period, I was a regular participant in one of the most important influences on my life and career as an artist. Mississippi Art Colony is a spring and fall artists retreat located south of Jackson in the rolling hills of rural Mississippi. Facilities at Camp Henry Jacobs are used for a week long painting frenzy by about 45 fully capable artists working independently in whatever mediums they choose.

In about 1987, shortly after moving to NOLA, I spotted a newspaper article about the art camp and was attracted by the chance to study with an artist I'd long admired. Hugh Williams was the invited instructor for the next session and I wanted desperately to go. I had a new artist friend and neighbor, Patti Pilie, and broached the possibility her... to which she replied: "Karen, I don't camp!" I mention that because I convinced her to go anyway and it's become a long standing joke after many years of our regular attendance at this well appointed "camp."

I'll detail more about my experiences at MAC as time goes by. Suffice to say, it came along when I could benefit most from the many outstanding "instructors" (visiting artists, actually, few really instructed) who were established artists and teachers from all over the country. I was in hog heaven! My work tumbled through enormous changes; peer support and competition was as much a motivator as travel show awards at week's end. It was fantastic... the kind of degree in fine arts that is often overlooked.

My attendance has been spotty in recent years. I find it difficult to find the time with family, career and a general need to slow down. Life continues to barrel on and it's hard to keep up. But I rationalize by saying that I had my turn, and since space is limited and in demand, best to leave room for others to benefit from this extraordinary experience as I once did.

My friend Cheryl McClure is on the road to Colony this morning and she will probably be updating her blog from MAC during the week if connections allow. Meanwhile... I'll be wiring and documenting for delivery to Memphis soon. I'd rather be heading to Colony!