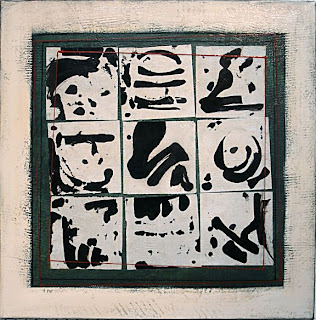 Good question... I'm comfortable with the grid style I've been focusing on for the past year and that's NOT a good sign. I can see it continuing to be a basis for something else happening... a breaking out of the grid but not ignoring it completely. I've said from the get-go that the grid and ink marks would continue to evolve and I have four canvases on the boards that are leading the way. Think back to the Structure monoprints (see label links for pic) I worked on recently. All are set aside for now, close to being finished but this early in composing a new show, I like to leave the finishing until later. Otherwise these works would have too much control over the next group, if that makes any sense.

I want the show in May to have little reference to Bokusho since I've moved beyond that element and I don't like crutches. Or at least I try to avoid them once recognized... I try, don't say I'm always successful. Am thinking 'Spring' and plan to allow a bit more color to creep into the works, but I've always been a color minimalist... except for red. I'll consider it a challenge and see where it takes me.

The painting above is an example of correcting a mistake by repeating it intentionally. In this case I meant to have a square line defining part of the interior, but it went off square (I'm so bad with measurements!) so I repeated several square lines at various angles and colors. Doesn't show up in the photo very well but I call it a fix.

Saw Hugh Williams' museum show yesterday and was flat blown away! If just a little bit of his authority and gusto leaks into my new works... well, I can only hope. I've mentioned before that I've known Hugh quite some time and consider his critique super valuable. He can be tough, but I usually get what he's trying to convey, sometimes rather heavy handedly but you don't forget it. If it doesn't get through to me, I think on it because I know there's something in there that I need to know. If we weren't two hours apart, I'd definitely be studying with him regularly. The man knows how to paint from the gut! Don't bother trying to google him, he cares not for pushing his work, especially via today's technology. So most will probably never know his genius. And that's unfortunate.

Karen, I know you would never believe it, but I am crazy for minimalism. Especially in terms of color. I love shades of white paintings with hits of subtle color. I have been just itching do do a white painting for ages now. But, with my chaos, I don't think it is possible for me. Sigh!

Don't worry about your measurements, those squares slightly askew only add to the interest. I can see you getting even more gestural with exiting your borders. I can even see the possibilities of combining your ink gestures (Bokusho)with your other paintings, with large and small blocks of color living amongst the ink gestures. Both large ink gestures and small ones! Lots of possibilities, hey!:)

Hope you are safe from all that Tornadic activity!

smart "fix" Karen - the result looks entirely intentional! maybe the high desert mountains in northern NM will have an influence on your new work!
Robin

Jacie, underneath solid color areas lies as much chaos as you create... well, maybe ALMOST as much ;-) Minimalism (to me) means nothing unless there is great depth... something just beneath the surface. Tornados threatened but moved on, thanks for thinks of us.

Robin, I'm in hopes of new seeds, but doesn't have to be dramatic, just enough to recognize. More likely to find it in the mtns than on Canyon Drive, methinks. Did I mention I can hardly wait???

The convention tends to think of yellow and green as Spring colours, but in my drive past hillsides of fields the other day it was the broken surface of deep reddish browns and chalk fragments after ploughing which spoke of new growth to come. The trees have a kind of pinkish-dried blood hue to them against the blue sky, not yet having any leaves at all.

I know what you mean about the familiar and crutches; it's amazing though how little to the outside eye can signify progress to us whose mark it is.

I agree, Olga... many of nature's spring colors are very close to fall colors when viewed at a distance. I like to think of it as an awakening of color, hints and tints.

Love this piece. Such a strong image. And the "mistake" is perfect!