I don't know where to begin... perhaps with this rainbow which might be considered "the icing on the cake!" It was a thoroughly artful time-out from the business of art, if that makes any sense. I've completed the demands of one exhibition and have only begun work on another... the timing was perfect to get away, take a breather and... become inspired all over again. Robin's invitation to visit for a few days was spot on! Raya, who was also part of our French residency adventure last year, lives in Santa Fe and had just shipped a large body of work to NYC, so she had time to join us for gallery hopping... saying it takes in-town visitors to get her out of the studio to see what's going on... sounds familiar, right? Here, we relive our gastronomic adventures at an outside cafe featuring French cuisine. 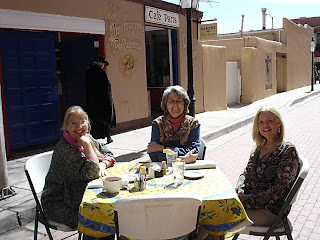 I've had the pleasure of several other visits to Santa Fe, was an artist for Waxlander Gallery for three years, had a solo show and sold well. It was a good arrangement but complications, including caring for an aging parent, meant I wasn't able to keep up the terrific pace required. Although I'm not pushing for that kind of commitment again, I dropped images and contact info at a few galleries where I felt my work would fit. Although I know it's the wrong way to behave, I tried to avoid speaking to anyone, though I did have a few positive conversations and maybe I'll hear from them, maybe not. The competition is keen for wall space in that town... and you may know by now that I don't do crowds well. If they like what they see, I'll hear from them. If not... I've got plenty to do as it is.

Wednesday and Friday were our 'hit the pavement' days, on Thursday we stayed at the compound in the hills. The views were incredible including the distant storm and resulting rainbow. The clouds that day also created fantastic shadows on the mountainside, topped by snow covered crests and waves of lower, pinion studded plains. We were overlooking the small town of Pecos, the monument there, historic Forked Lightening Ranch (once owned by Greer Garson) and Jane Fonda, Don Immus and Val Kilmer also have ranches in those hills. We waved...

I managed four small watercolors of views from interior windows, one was of the mesa which stood immediately behind and above the house. I left that one as a hostess gift for the owners since it seemed to offer the most detail. 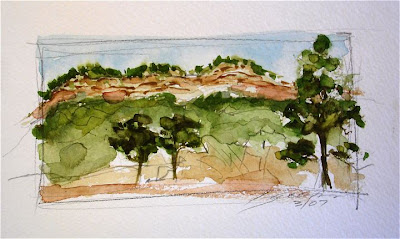 Two others were too loosey goosey in their attempts to capture the distant mountains (see rainbow photo above) but when I simplified the dark shadow created by the passing storm, it was a keeper. 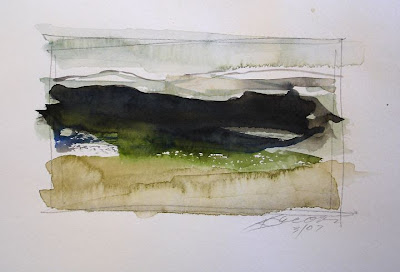 Need I add that I thoroughly enjoyed myself... as I told Robin, never once did I wish to go home even a day early... and most know how I get antsy when away from my nest. Thanks again, Robin... do I ever owe you!

Labels: -Galleries, 'Watercolors, ~On The Road

I love the last water color with the dark storm - wow - stunning.

Sounds brilliant, and looks wonderful. I do hope that good things result - sometimes schmoozing is the last thing gallery folk want to get into too!

you owe me? Cool! Let me think of a creative repayment.....
R

Lisa,
having traveled with Karen, Robin and Raya, I can tell you that this adventure could never be called a "vacation." They do real working artist trips! Anyone else would have to come home and rest for two weeks -- they just come home jazzed!

Am I jealous? You betcha!

Karen - It is so great to hook up with fellow artists like this.

I am a little envious - but mostly happy for you all.

What a great time it must have been. Thanks for posting.

Hey! Nothing keeping us from planning another trip! I heard NYC in Spring of '08 mentioned... let's do it! Time's a-wastin'...