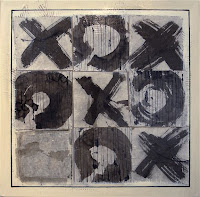 I've discovered "Google Alerts" thanks to a mention on Rebecca's blog. I created several alerts including one for... wait for it... "Karen Jacobs," of course. Waded through a lot of familiar stuff of my own, then a bunch of other KJ stuff (physical therapist, reporter, etc... it's a common name.) Then some interesting references where my work has been singled out by other artists as talking points... and then... a review of the Game Show my Memphis gallery put on in January. I sent two paintings that fit the bill.... and the review mentions one (pictured here) :

Two forays into the ancient paper-and-pencil game of tic-tac-toe elicit widely differing results. Darrell Loy Scott's little painting "Tick-Tack-Toe" is, not surprisingly, divided into nine squares, inside each of which a rudimentarily drawn person holds up, in a different pose, a card bearing an X or an O, indicating a game brought to a draw. The piece is cute and funny. Karen Jacobs, on the other hand, offers a similarly small mixed media work in which the Xs and Os dominate in a boldly graphic manner, dense black against a silver background, each panel made individually and fixed to the canvas. There's some debt to the Pop Art style of Andy Warhol and Jasper Johns, but this is a vivid and vibrant piece, endowing the markers of the game with mysterious and monumental power. Slanting from upper left to lower right, X definitely wins.
===
Well, that was fun. Points for Google Alerts. Since the article is over two weeks old, doubt I'd known about the review had I not stumbled across it myself. Granted, it's not all that important, but perhaps galleries aren't aware of how delicate an artist's ego is and how a few printed words of acknowledgment can bolster said ego.

The other discovery was a mention on this blog called Silk Felt Soil which seems to feature items of interesting design... will have to dig into it further, looks like fun.