Cleaning Up For A New Year 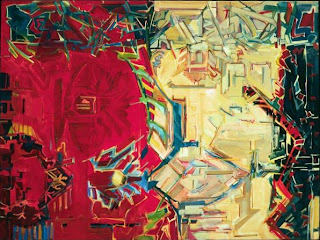 I will document at least 50 paintings as the year comes to a close, maybe more, if I get my act together and straighten out the prop piles of paintings that line the hallway outside my studio... accumulations of bare stretchers, abortions, confusions, promises and - sometimes - forgotten jewels. I've found that often it's best to put uncooperative problems out of sight and when they see the light of day again... voila! A Masterpiece! Well, not always, but at least I might finally see a solution where none existed before. Trick is, I've GOT to get that hallway cleared 'cause a couple of NOLA kids will be in-house for a week and the g-kid's bunk room (sleeps six!) is at the end of that long hall that houses my excesses. They all respect my stuff, but I'd best not push my luck!

I've got another horde of dated work (mine and others) propped behind the rec room sofa, a space properly used as a dart board alley. That work will be sorted through and eventually find wall space at the lake house... as good a reason for investing in that property as any. I'll quickly learn which works mean anything to me and which can, perhaps, find their way to eBay or it's equivalent.

I've traded and collected a lot of varied work as I "matured" as an artist... meaning, my tastes have changed handily over the years. And my own work has ventured into many side explorations which were fine but temporary, leading quickly to other venues. The Rug Patterns, for example... imperfect, unrefined and unrealized, but I have good feelings for them... I think I lost my innocence with that series. I explored wildly with technique, materials, imagery and attitude. The most exploratory were actually on paper, I think... the above painting is on canvas, rather refined but considerably unresolved. I still don't know which way is up! But I like the celebratory color and there's no doubt of the subject matter. Works during this time were beginning to get a bit of wall space, some were rather good galleries, but not really suitable for this series... they didn't understand it, I didn't understand it, the viewers didn't understand it. But it was good.