"... a sailboat can not travel directly into the wind but employs sailing technique known as "tacking," to zigzag across a headwind."

Okay, so maybe I've been thinking too much about our little sail boats, still waiting for a good breeze on a warm day to see if we can remember how to tack around our reclaimed lake. But there's some tacking going on in the studio that's giving me cause to ponder my path. I'm certainly not under the same full sail as when I started this bokusho project. Now, it appears it's time to tack a bit in order to get back on course. 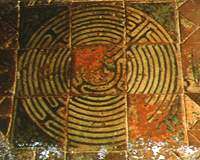 Talking in circles again, but with good reason. Circles are entering into the scheme of things as I try to pull together a composed body of work for the February show. First it was the labyrinths I'd become enamored with prior to and during the April trip to France. I didn't see any but my travel mate picked up a post card of one that was in a Mirapoix church she had toured (I'd read too much of the Cathar/Catholic miseries to be comfortable in these old churches so had busied myself elsewhere.) But the postcard was beautiful and I taped it up on my studio wall. Man... I could really get into that idea as a series. We'll see... 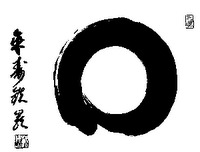 Then, tacking into an entirely different wind, there's the Enso, the Zen symbol for "Circle of Life" (or variations of same.) This, of course, comes from my fascination with all things Asian, and especially the brushwork. I've such respect for the centuries of artists represented, yet I have no desire to study it... only to borrow and absorb in such a way that I can create my own brush rhythms. It ain't so easy to make that happen... at least to my satisfaction.

I've collected folders of both circle types, and study the variations and meanings attached. A few attempts have been incorporated into some unfinished works... it's coming along...

Wow. That Enso Circle of Life is beautiful. Almost perfect on the inner edge. The outer edge breaks only at the overlapping beginning and end. Just a slight overlap. A perfectly controlled gestural explosion.

I always seem to ignore the text. I can't read it for one, but from what I understand, its very important to the art. Are you going to be adding words? Other than the occasional letter?

Google should charge tuition! Amazing what I learn as I let my mind drift through keyword searches. I'll collect a few thoughts and images of Ensos and post how varied they can be in meaning as well as formulation. I'm not sure perfection is the goal, though it's a practiced meditative process (not my cuppa tea, in any case.) Ummm... the labyrinth is also a form of meditation... wonder if I'm missing something here. Maybe Google is my way of meditating.

Oh, you asked about text... I sure can't read it either. No, I won't pretend to be a Zen scholar, and my marks will only be derivative of the ancient art, not really meaningful. One could spend a lifetime studying the source of everything that turns us on to paint... not that much time left and much to investigate!

I hear ya w/r/t not-imitating the past, but rather filtering it and puting your own spin on it. Maybe even ignoring the past a bit and completely applying your own understanding.

Huh. Nice meditation connection. Are you saying that you don't find your own painting "meditative"? Either the act of doing, or the finished product for our slow appraisal?

Oh, and I didn't mean "perfect" in the circle template/computer aided drafting sense. But in a more human warts-and-all beautiful sense.

I don't think of my work as meditative as much as contemplative. As I understand the meanings, contemplation goes beyond meditation. Which would also describe (as you mentioned) my efforts to transform (spin) age old symbols. Yeah, no perfection here... warts can be beautiful! Well, interesting...

Thanks for the URL, Linda... actually I like the third one best. The simplicity says more to me than the scroll image. Cleaner, less complicated.