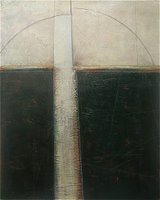 I've begun to think of them as "Complementary Paintings"... as in "Thanks for the idea, the inspiration, the compositional arrangement, the colors, the value patterns, etc." What are you supposed to say to such as this? I've had works copied verbatim, or simply borrowed but still obviously mine... and I've had my whole web site lifted and manipulated for use on eBay... especially showing installation of my shows in various galleries and claiming to be the work of some fictitious artist. I'm not going into that today, already my blood is curdling just brushing with the memory.

Actually I just wanted to quickly put up an older work and let the world know I haven't given up blogging, just busy with other things including a family visitor and we've been going through old pics and memories... fun, but leaving no time for the blog. So what painting did the magic pointer select today... one with enough baggage to open the door to that other business... the one where we are supposed to feel honored and complimented when our work is lifted and interpreted in a fashion that would not have left my studio... but fortunately, it doesn't have my name on it. Okay... so why is it okay for me to openly admit to being inspired by Johns or Diebenkorn as I've recently blogged? Maybe because they are declared masters and therefore open game... teachers, you might say. I don't know... I'm just musing around. 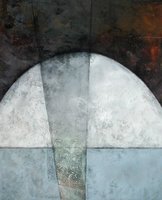 Anyway, here's the proud offspring, the painting I just happen to find on the web one day when I googled my own name. The kid had even credited me with the inspiration so I do appreciate the acknowledgement. And yes, somewhere deep inside I think it's okay to be used as a learning tool... but would also offer the advice that one should be selective as to whom he chooses to use as a teacher... what the heck are the qualifications? And I've also received actual thank you emails from artists, pointing me to their websites which contain faintly similar (but incredibly awkward) geometric lines and color grids. If imitation is the highest form of compliment, why do I feel all prickly about it?

Hey Karen I do love these 2 paintings! Very impressive variations in color in the darker areas. I do enjoy enlarging your work to look at the details.

Hey I recently heard the musician Carlos Santana say that "to take from one person is stealing but to take from many is called research."

Once your work is out there it is fair game as inspiration to others. Sometimes the result of the inspiration will inspire you right back, and sometimes ... well, let's just say that the results might be brave attempts. As long as you speak boldly and clearly in your own voice, weak echoes will always be seen for what they are. Be pleased that so many are drawn to your work, and that it does give joy and inspiration.

I find your Moonbeam just wondrous.

I love what you say, Omega. Right on target.

But it's a strange world we live in when our work can be literally re-branded as someone else's. That's the part that can get your blood boiling.

Karen, it still bugs me when I think of the theft of your website. It was theft of both identity and intellectual property and I know how that feels.

Martha, it's not just today's world. Many paintings across the centuries have been 'appropriated' by other artists and work by many women was 're-branded' with signatures of their fathers. We can only hope that, like with Karen's work, the copies are only poor reflections.

I like the Santana comment Jacie quoted. I've always felt that this is the way I've worked through the years....learn a little from so many artists and teachers and then let them meld into my own "voice".
Cheryl

All good comments which make me wonder who am I to point a finger... I've done my share of borrowing compositions, etc. Hopefully, as a means of finding my own voice, but borrowing, just the same. So how does one give back what they've borrowed? By loaning out to another, I suppose. Yet, there is still that 'prickly' feeling...

I am outraged that someone would copy your work/website and credit it as their own. I suppose the internet makes this stealing easier to do, as well as easier to detect.
Since what you create are images, it's hard to pinpoint the difference between plagarism and inspiration.
It's very interesting to see these two paintings, and my different emotional response to each.