The Flip Side of Serigraphy 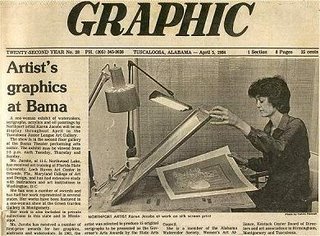 With all the remembering going on regarding the new/old lake house... there was a dark side too. I was thinking back to the work I was doing at the time and it was primarily serigraphy. I'd made a mark for myself with the medium because no one else was doing much of it, at least on my beaten path, which was mostly juried arts festivals within a day's drive. My first major gallery venture gave me a wonderful springboard into art as a career with serigraphs being my strong suit. Silk screen printing, at that time and at least as far as I knew, was very primitive. I used simple cut stencils but did go into a bit of photo emulsion usage, all oil based as this was before water based inks had been perfected.

At this time, I was also suffering from periodic depression. It would come and go but wasn't monthly so I didn't know where to put the blame. I happened to pick up a magazine that probably saved my life. It included an article and chart of dangerous artists materials... and I learned that I had been literally bathing in depressant solvents whenever I printed. This was about 1985 and they were just beginning to talk about this sort of thing. The depression cycles had become worse, even including suicidal thoughts. Talk about timely information! As it happened, J got an offer he couldn't refuse and we had to sell our "forever" house on the lake and move to NOLA. As you probably know, silk screen posters were everywhere in New Orleans, printed on very hi-tech equipment I could never have competed with anyway. So my printing days were over forever, I was able to quit cold turkey and I had no regrets. Life improved immensely. I can't imagine being in that kind of funk, can't even remember it now.

Pano 4, serigraph, 12x25, 1983
**************************
At a recent b'day celebration for our 6 yr old g-kid, the 11 yr old volunteered to wrap the gifts, make cards and signage... whew! Great value, methinks. After the festivities, all wrappings, etc were tossed into the guest room to deal with later. Today, dealing day, I discover that the big sign was drawn on an expensive, pristine piece of 2 ply rag museum board! I'd assumed it was the back of an old piece of poster board... ha! Guess I'll need to explain the difference to the young artist.

Ah yes, those good old days! It was only decades later that I discovered why my colleague and I had been so skippetty and giggly then happily woosey when we spent days, weeks at a time working in our small office doing book paste-ups - with great tins of Cow gum. It was only when discussing how much easier and less messy layout is on a computer these days - but thatI had somehow enjoyed using cow gum that a friend from then said to me: "Ah glue sniffing, of course." and laughed.

Back in my printmaking years I spent days-into-evenings doing etching on one side of the big art room at the local community college, cleaning zinc plates with mineral spirits and then ammonia, while other plates sat in open acid baths, and the silkscreen artists were filling the entire room with solvent fumes from their work area on the other side. There was no exhaust hood, no open windows. Just A/C ductwork. Scary!!

Good lessons for all of us.
Karen, at least that young artist knows to use the best for best results!
AAB

When my children were small, husband in grad school, to extend my salary teaching, I painted craft objects at night in a very tiny room and used a lot of xylenol products. A few years later, my doctor told me they had definitely affected my lungs and asthma permanently.

The things we didn't know...

I wish i could read what's in that article about you. But my aged eyes aren't that good.

When i was young, my brothers used to put models together with airplane glue, which i think is now banned. Thinking of all those chemicals that you used is pure scariness.

The world, it is a-changing... and sometimes to our benefit. Meno (may Icall you 'Meno'?) you can read more than you aksed for here, scroll to the bottom for the above article http://karenjacobs.com/Articles.html

Thanks for the link, what a fun trip through time and your evolution.

And Meno is fine, we don't stand on ceremony around here.